When Will the Pandemic Be Over?

The pandemic will be over when most people have either been vaccinated, have gotten sick, have recovered, or have died. It won't be over soon. Not next week, not next month. Maybe next year, probably 2022, according to the World Health Organization scientists (WHO). Until then we will just have to deal with it. Only 2.5% of the US population has contracted the Coronavirus so far (CDC), mostly in cities and surrounding urban areas. COVID-19 has just recently been reaching rural inhabitants. This is where the number of cases is currently surging.

Wisconsin is one of several US states that have seen positivity rates growing to more than 10%, and some states are reporting more than 20% (Vox). The virus is on the move, not just in the US, but around the world. In developed countries, the rise in cases is partly due to relaxation of restrictions and more frequent gatherings of people tired of behaving responsibly. While we have suffered loss, deprivation, and isolation, many parts of the world have yet to experience the full on slot of the virus. Or so it would seem when examining the data.

In less developed countries, other influences may be at work, though much is still unclear. One of the regions that is no stranger to epidemics (Ebola, HIV) is Africa. It is home to 1.3 billion people and has a reported total of  1.7 million confirmed cases of Coronavirus (Data Explorer). When compared to the US which has 25 thousand cases per million people, Africa seems to be doing well with only 1200 cases per million. The WHO suggested in late August (Situation Report) that African "figures should be cautiously interpreted as they may be affected by many factors, including the current testing capacity and strategy, and delays in reporting."

What is it then that makes a country more vulnerable to outbreaks? A RAND Corporation article published in 2016 after the Ebola outbreak, identified several factors contributing to susceptibility to disease, including health care readiness, government transparency, human rights, economic development, infrastructure and technology. Using these indicators, the researchers ranked the nations of the world as to how vulnerable they would be in the next pandemic. According to the report, 22 of the 25 most vulnerable  countries are in Africa.

Many of these same indicators are also listed as causes of poverty. When you are poor, health care is often out of reach. When natural resources are polluted or limited, sanitation becomes difficult to achieve. In the illustration below, I have mapped these two influences across Africa. The data for this map came from IndexMundi and the WHO/UNICEF Joint Monitoring Program. Values represent percent of the population. 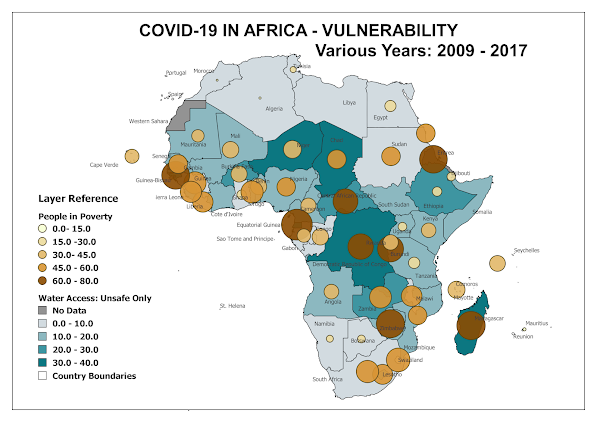 Many of the countries where poverty and lack of clean water are highest are the ones at the top of the vulnerability ranking mentioned earlier.

How then is it that Africa seems to be doing so well against the virus? In the published official reports of the infection status in Afica (COVID Data), only 20 of 57 countries report total test numbers. In the US and other countries, one of the most important indicators of how well the virus is being controlled is the positivity rate which is calculated by dividing the number of confirmed cases by the number of total tests. Two of the countries not reporting (Democratic Republic of Congo, Central African Republic) are also two of the most vulnerable.

How can we determine the status of testing for countries not reporting the total tests administered? One possible way is to compare the number of positive tests to the recommended number of tests per population. One article has stated that "universally", epidemiologists recommend that 10% of the population be tested. As for testing results, NPR has reported that one goal is to keep the percent positive tests to total tests (positivity) less than 10%. John Hopkins and WHO suggest the rate should be below 5% before loosening restrictions. If we use 10% positivity as a general guide, we can compare the number of positive tests reported to the number of tests that should be performed. The map below shows the results of the comparison as a percent (circles of relative size), which can be used to evaluate the level of testing going on in each country. The countries themselves are shaded to show the total population levels in millions (WPR). 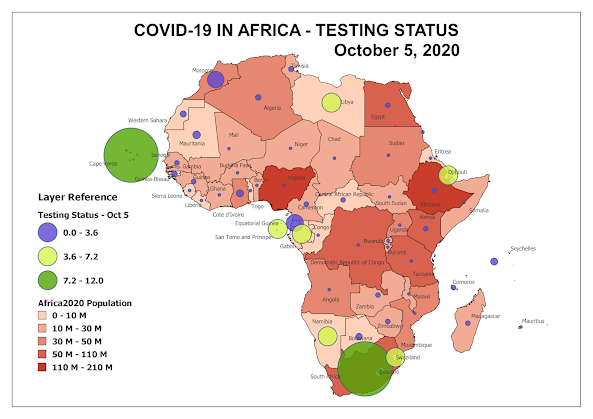 The smallest dots on the map represent the 35 countries with a percent positive of recommended testing at less that 1%. If testing met the recommendation, then the number of positive cases would indicate a very low level of infection. Due to the fact that most countries had reported their first case in March and the existence of densely populated urban areas, it seems likely that testing is too low and the infection rate is higher. Another example of this is Nigeria, which has a speculative positivity of 0.2%. It happens to have also reported the total number of tests performed. The actual positivity rate is 11%, but the actual number of total tests is only 0.2% of the population. This is no where near a sufficient sampling of the inhabitants.

A country that meets a theoretical controlled level with a positivity of 11%  is South Africa. It also has reported the highest number of cases in Africa with over 650 thousand. The actual positivity rate based on reported tests performed is 16%.  This number suggests either that the virus is out of control or that more testing needs to be done. South Africa is one of the most densely populated countries in Africa, so it is important that their tests performed are kept high. Other countries with larger populations, but postulated rates under 1% are either in the midst of outbreaks or powder kegs waiting to blow.

Lack of data is one of the issues mentioned often in this blog that hinders the understanding and evaluation of the virus and its spread. The suggested inadequacy of testing in Africa discussed above may be hiding an iceberg of infection, where most of the cases are below the radar. At some point, the other nations of the world may be called upon to come to Africa's aid, We can only hope that they have gotten their own infection rates down when that moment comes.