Contact Tracing: Tracking the Virus To Clusters of Infection

The purpose of Contact Tracing is to find possible infections and stop the spread before it goes further. When someone is tested and the result is positive for COVID-19, the case is turned over to the tracers and the investigation begins to find those contacts who may be infected, but do not know it yet. If the cases are found soon enough and the patients are quarantined quickly, they either get better or are provided more intensive care (Tracing Principles). The important thing is that they would not be able to transmit the virus to one of their contacts. If not enough of these cases are found, the virus continues to spread and, at some point the hospital beds fill up, treatments become depleted, more health workers get sick, and the system breaks down.
In the last post, I introduced the idea of Contact Networks as a tool that can be used to visualize an infection and from which certain conclusions can be drawn that might help mitigate the spread of COVID-19. The networks are built using data from the tracing investigations. Groups of individuals can be assembled, branching out from the original patient. The map of Winnipeg in the last post showed a way to add a geographic dimension to the network in order to highlight certain influences that are spatially coincident with patients. Sometimes, however, it is not the physical distance between these features and patients that is important. By incorporating sites as nodes in a Contact Network along with contacts, a clearer picture of their relationships becomes apparent.
An example of this sort of graph was created by researchers at the University of Arizona, Tuscon, They used data from the SARS virus outbreak in Taiwan in 2003 (SNA For Tracing). 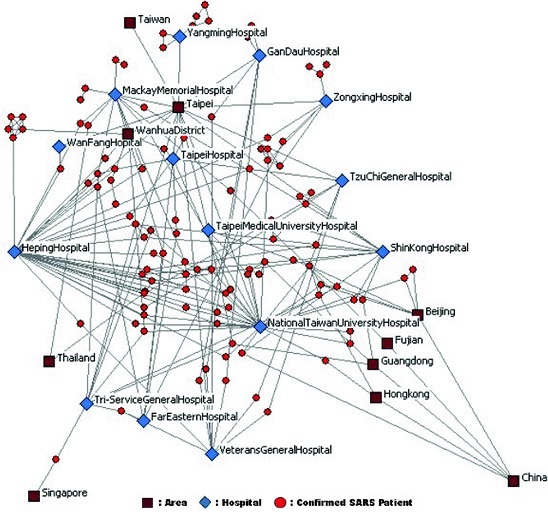 The network focuses on patients who have had contact with hospitals where outbreaks of the virus were active. In the graph above, major clusters of patients surrounding each hospital have been removed. What remains are those individuals who act as bridges between clusters. This additional interaction adds to the possible spread of the infection.
For COVID-19, as contact tracing data is analyzed, it is becoming more likely that most of the transmission of the disease occurs at places where people gather. This includes workplaces, special events, recreation areas, bars and other social gatherings. The exception to this trend is when the majority of the attendees are wearing masks, social distancing or outside with free air flow.
The evidence for these conclusions comes from a number of reports made by health departments regarding the status of the disease in their area. On July 1, after a month of starting to reopen, the director of Public Health Dane County in Wisconsin announced new restrictions on bars in response to an increase in cases (Public Health). Data from contact tracing of 614 new cases for two weeks in June indicated that 45% of patients had attended parties outside their home. The Tavern League of Wisconsin criticized the new order, saying it was unfairly penalizing bars over other activities like protesting. It was during this time that nightly protests in Madison were drawing hundreds of people in response to the police custody death of George Floyd.
The county released more detailed data, showing that 21% of the patients said they had been to bars during that time, but only 2% had attended the protests. 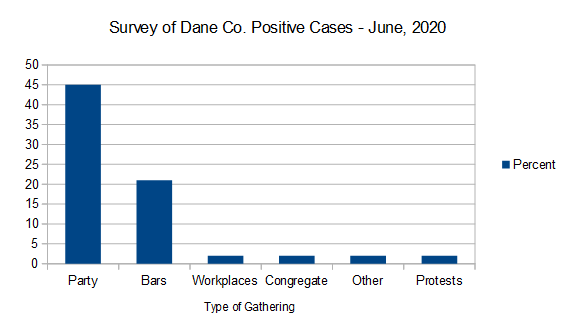 Many of the protesters were wearing masks in news footage and the crowds were outside in the street with a free flow of air. This is just another indication that personal preventive measures can help bring the positive cases down. Gatherings without protection and inside allow the virus to spread quickly.
In July, the Lincoln County, Oregon, public health director presented data to the Board of Commissioners showing that most local transmission was due to outbreaks, rather than out-of-county visitors (sources of infection). An outbreak was defined as two or more cases in separate households linked to a single event or location, To illustrate the spread of the disease, the health department produced a chart using contract tracing data for four individuals. These original cases were responsible for the infection of 58 additional people over several weeks. 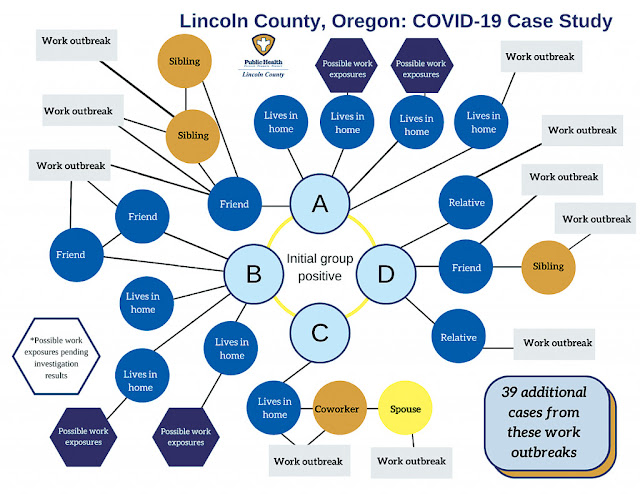 It was not known how the original patients got the virus, but three of them were responsible for 10 workplace outbreaks affecting 39 people. These and other outbreaks resulted in 73% of the positive cases in the county. Additional cases came from household transmission or sporadic instances of community spread. The position of nodes in the diagram above has no relation to their actual location relative to each other within the county. This helps visualize how the links between cases and gathering places are related.
When restrictions are lifted on residents of different jurisdictions, it is important for people to remember that it does not mean the virus is gone. The virus, according to most experts, is here to stay for quite a while, even after the vaccine becomes available. No matter how young or old you are, or how unafraid you are, if you catch the disease you may be lucky and not suffer a long illness. You will, however, spread the virus to anyone you come in contact with unless you are careful and protect them from possible infection: wear a mask, stand apart, wash your hands.
Posted by Jim Cory at 2:52 PM No comments:

COVID-19: Connecting the Dots Between Spreaders and the Vulnerable

In the last post I introduced the idea of connections and how they can affect the spread of COVID-19. In this post I will go a little further down the COVID data rabbit hole to where the abstract is real and relationships can be fatal.
You are probably all familiar with the old saying, "It's not what you know, but who you know". For those who don't, it means if you want to move up the ladder, your knowledge and skills are less important than your network of personal contacts (Wiktionary). In this time of pandemic, there is a downside to connections if you test positive. The virus will know who you know and can use that ladder to move on to the next host.
No matter how reclusive you are, we are all connected to other people: friends, relatives, your spouse and kids, work mates, bar buddies, pickup basketball teams. And, of course, the people we know have their own set of acquaintances, and so on down the line. Before delving deeper into the intricacies of "social networks", as they are called, it is important to know about the background conditions that exist which determine where the most vulnerable live. It is these people, at risk of severe complications from COVID-19, who need to guard against connections to those already infected.
The CDC has been alerting us all, over and over, that certain individuals are more likely to have negative outcomes from the virus. In Austin, Texas, researchers have compiled a set of measures that can be used to identify those populations and locate them on a map (Houston Map). The measures they used included a number of economic, environmental, and health care factors that can influence vulnerability.. 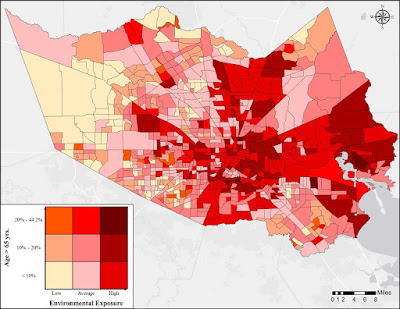 The idea was that if you know where these areas are, it can help in the allocation of testing and health care efforts. The data for the study came from national and local databases that tied records of the following statistics to census tract areas:
But how does the virus find these people? That is where the concept of networks can help to uncover the "invisible threads" tying us all together.
Networks are defined as a set of nodes connected to each other by links or "edges". Networks can be used to describe many phenomena, including computer connectivity, electrical systems, biological interactions, and financial transactions (Network Theory). Social Networks describe connections between people and between people and other entities they may interact with. In epidemiology, the study of disease within a population, Social Networks can be used to visualize the spread of disease and possible interventions to control it. This type of Social Network is referred to as a Contact Network.
The data required to construct a Contact Network is produced by Contact Tracing. In an outbreak, many investigators are needed to interview people who are infected, tracing back along the individual's set of contacts to determine who they may have come in contact with and when. This list of contacts might contain people who will become infected through the contact or who infected the individual. Tracing is very time consuming and depends on the cooperation and recollection of the patients. It therefore has the most affect on disease control when the rate of infection is low (SNA For Tracing). Automated tracing through cell phone proximity logging can speed up the process of identifying contacts, as long as security concerns are addressed. In the end, though, manual interviews are still needed to provide health and quarantine support (Practical Application).
By adding a geographical value to network nodes, researchers at Penn State were able to locate individuals associated with nodes on a map while maintaining the links between them (Where You Go). 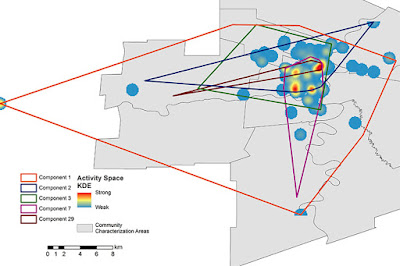 The networks they mapped above are referred to as components. The nodes in each network represent groups of at risk street youths whose residences are shown linked to each other. The networks are overlain on a density heat map of locations where at risk behaviors, like drug use, were performed by individuals in the network. The map shows a high level of overlap between the various networks relative to the risk sites, indicating a more cohesive interaction between networks. It seems possible that in a disease investigation, similar mappings of contacts along with areas of vulnerable populations might provide clues to transmission sources within those communities.
In the next post, I will look more closely at typical Contact Network analyses and how they help uncover gathering places that accelerate disease transmission.
Posted by Jim Cory at 5:46 PM No comments: