A Tale of Two States

Besides the big bailout programs passed by Congress and the coordination of vaccine development by the National Institutes of Health, most of the hands on work of fighting COVID 19 is happening at the state and local levels. This includes the procurement of medical supplies (ventilators. Personal Protective Equipment, ICU beds, and testing kits), the management of hospital capacity and testing strategies, and coordinating public information distribution. Another important responsibility of state and local leaders is to provide guidelines and limitations for how we need to change individual behviors to help curtail the spread of the disease.

Without viable treatments beyond ventilators and without a vaccine yet available, there is little left that can stop the virus from rampaging around the world claiming thousands of lives. The only remaining preventative measure we have is social distancing. By limiting human to human contact and proximity, the spread of the virus can be slowed. There is no way to stop it completely, since we need to obtain food and care for our sick. By staying apart as much as possible we can at least lessen the stress on the health care system and gain valuable time in which to develop medical interventions.

An example of how our social practices have aided in the fight against the Coronavirus, I combined two state's graphs of deaths over time with the incidence of government restrictions on social interaction. The figure below compares Massachusetts responses to that of Illinois. These two states have similar population characteristics that allow us to compare the effects of other variables. Both have one very large metropolitan area (Boston - 7 m pop; Chicago - 9.5 m pop) which represents over 70% of the population in the entire state (Wikipedia; US Census). Both of the states also have a significant regional and national impact based on their industries and trade (Wikipedia) 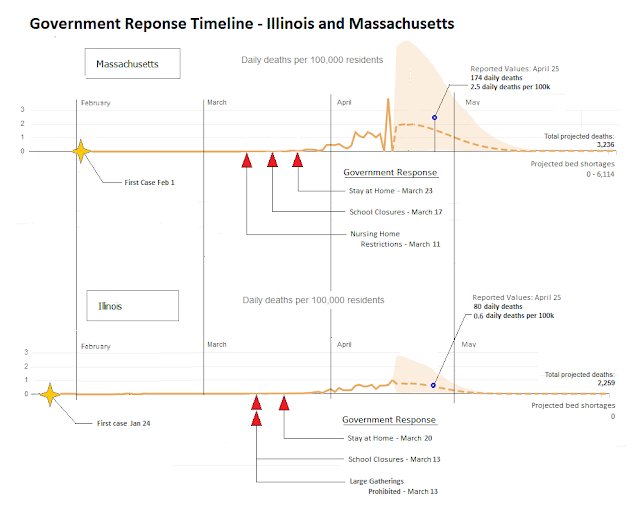 I added markers to the graphs of deaths per 100k per day (NPR): a star for the first case identified in each state and a triangle for the date on which major social behavior recommendations were issued. In both of the states, the first case was reported well over a month before significant deaths began to occur.The implementing of social regulations, while similar, differs by 3 to 4 days; Massachusetts lagging behind Illinois..

Both Massachusetts and Illinois took steps to begin limiting social interaction on the 11th and 13th of March. In the case of Illinois (Executive orders), this included limiting large gatherings of people and school closures. In Massachusetts (Executive orders), only nursing home restrictions were invoked. School closures happened 6 days after the first order. On March 20, Illinois instituted "Stay at home" regulations; Massachusetts began stay at home policy on March 24, four days later. When you look at the lines representing deaths per 100K per day, it is clear that both states enacted restrictions over a week before deaths began to rise, The projected outcomes for the two states, however, show strikingly different levels of total deaths: Illinois - 2,269; Massachusetts - 3,326.

Researchers have pointed out relationships between delayed shutdowns and deaths when comparing California and New York (NPR). As mentioned before, there are many factors influencing the virus' behavior. One that may also contribute to the differences in death rate between the two states just mentioned is population density; New York City is more dense that L.A. and Boston is 30% more dense than Chicago (US Census). Staying away from each other seems to be a useful strategy in limiting the spread of the disease until approved treatments and/or vaccines become available. The question is, how do you stay away from people in tight living spaces and packed subways.

Today in Wisconsin, as in many places in America, we are still under lockdown (we call it "Safer at Home"). In fact, our Governor, Tony Evers, just extended the lockdown until the end of May. Since I am in the at-risk group, being older with an underlying condition, I am thinking that caution moving forward will help me stay well. I am also retired, so, as long as the stock market doesn't completely bottom out, my savings will carry me through.

I know that there are many who would rather get back to work sooner, so they can start making a living again, caring for their kids, paying off their car, and covering all the other monthly bills we all have. This is where we reach the end of what we know and what we think will happen. The data only goes as far as today, tomorrow we have to guess. The good thing is, we can use the past to project into the future; based on what has happened before, from the data, we can extrapolate what would happen if we changed one variable, like say opening up businesses.

Let's take another look at the "flattening the curve" graph. The chart shows a dashed line crossing the center of the diagram which represents health care capacity. This might be the conditions under normal circumstances. Up until now, hospitals do not maintain warehouses of medical supplies, just in case the worst should happen. This is why there has been a herculean effort to ramp up production of protection equipment and build up patient care facilities in sports stadiums. The reality is that the line on the graph representing health care capacity is actually rising over time as suppliers respond to the emergency..


In my modified graph, the new line for number of cases (green) represents a growth in patients that was at first not completely anticipated. It happened so fast that supplies initially fell behind - this is where the green line passes above the orange line (capacity). For a time, there were not enough beds, ventilators, testing kits, or health care workers to handle the influx of patients.

Eventually, supplies have begun to catch up with demand, and due to social distancing in all its forms, the incidence of new patients has begun to level off. This is where the green line (patients) finally goes under the available health care line (orange). Some of the actual data about the spread of the disease is worse than shown in my mocked up graph.

The graphs above represent deaths per 100k per day for three states, and each are different. There are many factors that can alter how the disease progresses. One of the major influences, however, is whether or not the response to the virus has been swift and vigilant or delayed and relaxed. This virus is a wild fire and without control it will burn the place down.
Posted by Jim Cory at 5:59 PM No comments: