The Path of Infection - The Road To Recovery

Much of public policy regarding COVID-19 has to do with limiting the spread of the virus. While it may seem like a totally random occurrence, popping up unexpectedly here and there, the spread can be  calculated by a model based on the virus biology and the structural landscape of potential hosts (you and me). The predicted spread, however, cannot account for random variation and depends on the accuracy of the information fed into the model. What makes this process difficult for COVID-19 is that little is known yet about the infectious nature of the virus.
Below are a group of maps that allow us to visualize the spread of the virus. 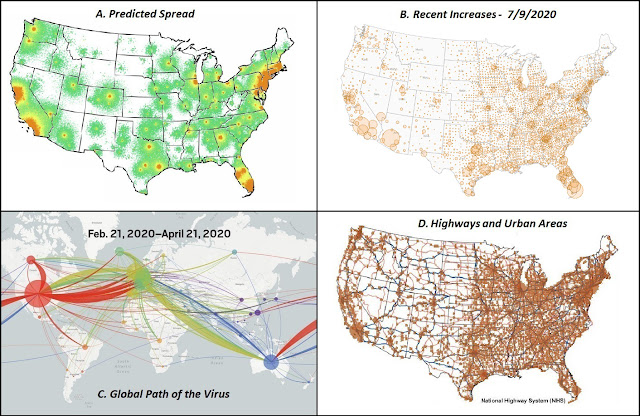 The first scenario represents households (dots) that are all perfectly self-isolating. Under this scenario, no one would catch the disease, even if some people were infected. Without close personal contact there is no transmission. This is not a realistic option, though: people in the same household would find it very difficult to isolate from each other and without some interaction with others, it would not be possible to obtain food, medicine, healthcare and and other  public services.
At the other end of the scale is scenario 3, where interactions are the same as before the pandemic. People would be very closely connected and if only a few people were infected, eventually all would contract the disease. Somewhere in between 1 and 3 is scenario 2. It represents the situation where slightly more than essential contacts are taking place, perhaps allowing for some on site work and socializing, but still without social distancing practiced. Even in this case, 90% of all households would be connected and that is a path the virus can use to infect more individuals. If you get sick, you may not have symptoms, but you will continue to be contagious. If you visit a friend, a neighbor or a relative without precautions, you may infect them. What if they also have an existing health condition that puts them more at risk of experiencing a life threatening infection? One that you could have prevented.
The longer people stay away from work, the more precarious their economic well-being will become.  On the other hand. the more that people reengage with others, the more important it will be to use masks and separation to keep their distance from infected individuals. The solution seems to be to take it slow, monitor things closely and go no faster than the numbers allow.
Posted by Jim Cory at 5:21 PM